On an eternal quest to build and learn

I take a lot of notes. Obsessively. Any time I’m writing code, I’m also writing prose: documenting every train of thought, code snippet, and the structure of the program I’m working on. For me, it’s almost a form of cartography, mapping both my mind and the code. Originally, I did this all in Notepad in Windows and nano in Ubuntu. This left much to be desired: I couldn’t easily show dead-end paths, Notepad is just ugly, displaying code snippets was clunky, and other small annoyances piled up constantly over time. Enter Sublime Text.

Sublime Text is a powerful, highly extensible, and beautiful text editor available for Windows, OSX, and all flavors of Linux. Powerful on its own, its usefulness is multiplied by the plugins available to it. There are two versions available, ST2 and ST3, the latter of which is in beta. Sublime on its own didn’t solve all the problems I was having with my note-taking, but this is where its extensibility comes into play. There is rich support (via plugins) for Markdown, which is a great way to introduce structure and rich content to your notes, while providing the ease of use of using a plaintext editor. Starting this site (which uses Markdown built by Jekyll to format posts) really got me excited about using Markdown in my everyday work, despite having used forms of it for quite some time on Reddit and Github both.

Thanks to Sublime Text’s excellent Package Control installing these plugins is a breeze. Launch Package control with Ctrl + Shift + P and type ‘Install Package’ and then Enter. Now start typing the plugin name you wish to install, Enter again, and that’s it! Repeat this process for each plugin you wish to install. 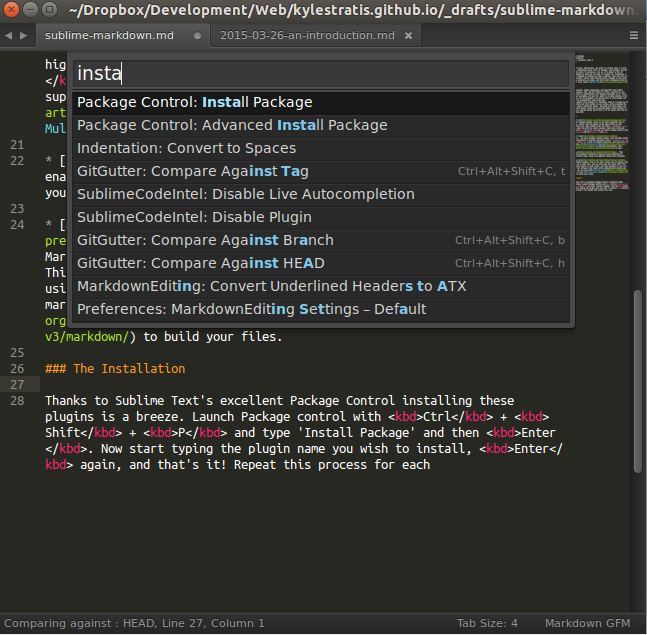 Sublime Text is already a beautiful editor, but there is a rich environment of themes and color schemes available for your tinkering. Across all my installations, I like to use Monokai Extended for the Monokai-Bright color scheme. Install this as you would any other plugin. On Windows, I prefer the default Sublime Text theme, but on Linux I like to use the Soda Dark theme.

To configure Sublime Text and your extensions, simply go to Preferences > Settings - User (for Sublime) or Preferences > Package Settings (for your plugins) and then pick the package you wish to configure. All settings files are in JSON, and the default settings (which you should never edit, as these will get overwritten with every update) show you all the options you have for configuration. Below are examples from my own configuration:

Note: These are only additions. You may have other settings set here by previously installed plugins.

The color_scheme setting overrides the themes that come with MarkdownEditing.

The parser setting forces the Markdown Preview parser to use the Github API for markdown parsing, enabling extra features.

And that’s it! Happy note-taking, blog-building, app-building, and everything else you’re now using Sublime Text for!

This site is hosted on Github Pages and built using jekyll with the lanyon theme. My plan for this site is to serve as a hub to view my projects, social media profiles, and, most importantly, to share what I’ve learned from implementing various projects. My hope with this blog is that it will help others who have run into similar roadblocks to think about a way around (or through) them. I will be implementing more features as time goes on, and in a future post I will share how this site was set up and customized.